Today our adventure was to explore the affluent community of La Jolla in San Diego, California. La Jolla, in Spanish means “The Jewel” and is considered to be the jewel of some of America’s Finest Cities. What a great time we had and the views were spectacular! Before you go though, you may want to have a little history lesson right here on Our Talk of the Town.

La Jolla, known as home by the University of California San Diego (UCSD) and other learning institutes, occupies 7 miles (11 km) of curving coastline along the Pacific Ocean within the northern city limits of San Diego County. Since the 1880s La Jolla has been a favorite vacation destination because of its exceptional weather and wide variety of hotels, shopping, dining, events, and attractions. There is such a diverse list of things to do that it hasn’t lost any of its appeal over the years. The climate is mild, with an average daily temperature of 70.5 °F (21.4 °C).

One of the main features we wanted to see was the Sunny Jim Cave. The cave, is the only land-accessible sea cave on the California coastline and the only way to get in the cave is through a door that’s located inside The Cave Store. To get to The Cave Store plug this address in your GPS and head out (325 Cave St, La Jolla, San Diego, CA 92037-3684.) When you have reach your destination head into The Cave Store and purchase your tickets. The cost is $5 for adults and $3 for children. Once you’ve purchased your tickets you’re all set, just head through the door to your left. I would suggest sturdy shoes (not flip flops) since the stairs can get very slippery between the sand and water that gets on them.

My husband and me 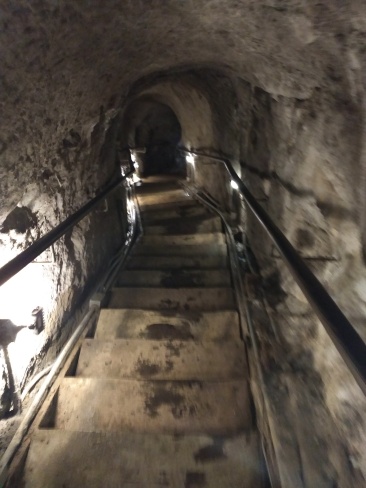 THE BEGINNINGS OF SUNNY JIM CAVE

The cave was the endeavor of Gustave Schulz, a German engineer. Gustav hired two Chinese laborers to dig the cave. Because the laborers only had picks and shovels, the cave took 2 years to complete. After its completion visitors could go into (and climb back out of) the cave by rope for the cost of 50¢. The descent by rope didn’t seem to be a deterrent though since there were 200 visitors a day at that time. Don’t let the rope scare you, since not too long after its completion 145 steps were installed and they’re still used today. That’s right, there are 145 steps to use when descending into the cave and yes, the same number of steps when climbing back out. Yep, you are allowed to stop for a breather. Of course most of won’t stop since competing with the others in our group seems to be the theme. (Ok, this was me… I couldn’t stop because no one else did.) I just walked around The Cave Store trying to catch my breath. After the climb out of the cave and while catching my breath, I visited The Cave Store. The store unique jewelers designers, vintage clothing and local vendors.

HOW THE CAVE GOT ITS NAME

The Sunny Jim Cave was named by Frank Baum who wrote ‘The Wizard Oz’. The opening of the cave bears a resemblance to a cartoon character Sunny Jim, who was a mascot for the British Force Wheat cereal products in the 1920’s.

The first picture is a drawing of “Sunny Jim”, a cartoon character created by the artist Dorothy Ficken in 1902 as part of an advertising campaign for “FORCE”, the first commercially successful wheat flake cereal. From 1903, the “Sunny Jim” cartoon character appeared on “FORCE” breakfast cereal boxes and on advertising boards across the United States. The second is a picture of the cave opening with a cutout of Sunny Jim to show why the cave is named after the fictional character.

A STROLL DOWN CAVE STREET

When leaving The Cave Store we took a walk out on the cliff at Gold Fish Point and then strolled down Cave Street towards the La Jolla Cove where penguin and other sea life seem to thrive. Something to keep in mind, Cave Street is a one-way street that circles around past the cove and the Ellen Browning Scripps Park. On the opposite side of the street you will have your choice of several tucked-away restaurants. So, if you’re there around meal time you may want to plan for a picnic in the park or take advantage of someone cooking for you at one of the quaint little restaurants.

At the bottom of the hill is a nice facility to take care of the personal necessities. When I was there a few street vendors were set up so maybe you could do a little shopping while there. Shopping? My favorite!

I hope you have enjoyed learning about La Jolla. If you have any questions, comments or shares, please leave a comment below. 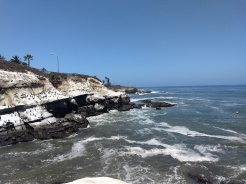 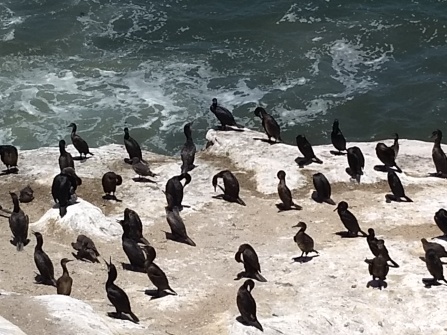 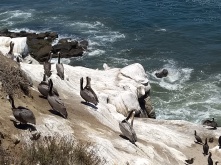 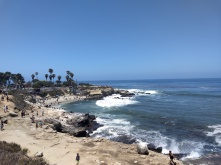 Welcome to Tammie’s Travels! I never thought I’d be writing a travel blog, but in the past 5 years I have traveled to and seen a lot of places. They’re not the usual exotic places you might see on a blog, but places that a family could load up and go to visit for a week or sometimes just a weekend.
It all started a little over 5 years ago when I met Michael. Michael is a construction superintendent who builds banks and credit unions. Although we have stayed longer in some places, most of our residencies are between 4 – 6 months.
I will be spending time writing about past and present travel because not only do we just live in the places we explore our surroundings. From living in Corvallis, Oregon and visiting tons of beaches to living in Bozeman, Montana and visiting Yellowstone National Park. There is so much I want to share with you that I hope you check back often.

A new clutch or handbag every month or 3!

I’ve heard of a subscription service for makeup or monogrammed accessories, but this is very awesome! Starting at $29.95 every month or every 3 months BagCycles sends you a new clutch or accessory. For just $49.95 you get a designer handbag every month or 3 months.

Plus Once you have joined BagCycles, you will also be automatically entered into our monthly giveaway for a designer bag. That means you have the chance at getting a free bag from a designer that is featured that month. It could be a Michael Kors, Louis Vuitton, Gucci and the list goes on.

Click the link above and find yourself a handbag that everyone will envy!